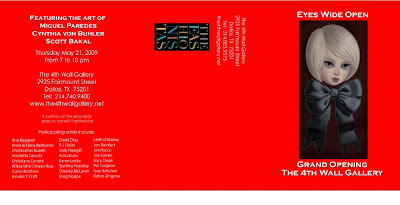 Dallas, TX—One of the most respected dealers of Lowbrow editorial and illustratrated art, Matthew Abramowitz, brings his renowned Los Angeles, Calif., establishments, The 4th Wall Gallery and The Gallery@Storyopolis, to Dallas.

Opening May 21st at 2925 Fairmount Street, The 4thWall Gallery brings its stable of popularly recognized artists from the Lowbrow movement (The underground visual art movement that began in LA in the late 1970’s and now is a widespread populist art movement that has been called pop surrealism.) to Dallas. The 4th Wall has been defined as “feeding one’s mind and soul through imaginative artists and is sure to tantalize and impress the minds of both the beginning and the experienced art collector.” With its unique and limited collection, The 4th Wall Gallery abolishes labels and celebrates artists breaking down the walls of conformity as home to an amazingly diverse group of world-renowned artists.

“We look forward to bringing to this vibrant City our one of kind pieces for families who seek to invest in collections they can share with their families for generations,” says Abramowitz. “The 4th Wall Gallery is the realization of a vision to make a home for art that pushes your mind’s eye. Kristine and I are proud to have Gallery Director, Jordan Roth as part of the 4th Wall team. He brings a unique understanding to both the local and global art scene.”

Three prominent artists will be featured in the opening exhibition: New York sculptor and painter CYNTHIA von BUHLER; New York and Miami painter MIGUEL PAREDES; and noted New York artist and illustrator SCOTT BAKAL. All three artists will be present for Gallery opening on May 21st.

Art & Antiques magazine, in March of 2006, named von Buhler “one of the top contemporary surrealists.” An internationally exhibiting visual artist, her work has been on the covers of New York’s Gallery Guide, Communication Arts, and New York Arts along with feature articles. Prior to moving to New York von Buhler was chosen by Boston Magazine as one of the “40 Bostonians We Love.” Von Buhler's work is in hundreds of personal collections all over the world; Howard Stern owns a portrait of himself painted by von Buhler, while Jann Wenner, the publisher of Rolling Stone, purchased von Buhler’s portraits of Madonna and Jimi Hendrix. In February, 2007, von Buhler and her interactive sculptures, were featured on television in Japan, Switzerland, and Germany as part of the exhibit, ‘Andy Warhol: In His Wake.” Her award-winning illustrations have been recognized as being among “the best and most cutting-edge” in the country. Von Buhler is the author of the popular children’s “The Cat Who Wouldn’t Come Inside,” published by Houghton Mifflin. In the Steven Spielberg celebrity-written benefit book Once Upon A Fairytale she illustrated a story by Martha Stewart. CVB Space, von Buhler’s art studio in Manhattan’s Meatpacking District, has been featured in Sex and the City, Law & Order SVU, Someone Like You (starring Ashley Judd, Hugh Jackman, and Greg Kinnear) and No Reservations (starring Catherine Zeta-Jones).

Paredes is a product of the explosion of street culture in New York City as he attended the prestigious La Guardia High School of Music & Art-- hip hop, rap, break-dancing and graffiti-- which greatly influenced him, as did the work of contemporary artists Andy Warhol and Keith Haring and the earlier works of Picasso, Chagall, and Miro. As talented at the stove as at the drawing board, Paredes also is known for his culinary skills at such Miami hot spots Delano Hotel, China Grill, and the Booking Table. The 4th Wall opening features the largest collection of Paredes works shown to date and will focus on his new Los Ninos series. (We need to add something more here about Los Ninos)

Scott Bakal has been showing in galleries and doing commercial work for the likes of Wall Street Journal, Washington Post, The New Republic, Yoga Journal and Discover. Bakal’s work also can be found in private collections throughout the world and has recently been included in the permanent collection of the Museum of American Illustration in New York City. His illustration for Me +theDevil, which recounts the story of the short life of the revered Blues guitarist Robert Johnson, has received a total of 21 recognitions and two medals. Works from the Me +the Devil series will be featured at the Dallas opening. For this series, Bakal uses simple shapes and lines to build a part fact, part fictional little known world of Johnson into something tangible for the viewer. In both the color and black and white work, he creates glimpses of life and ghostly images of what could have happened all those years ago which helped create the legend of his life and death.

Abramowitz and his wife Kristine also bring to Dallas The Gallery @Storyopolis. Called “the capital of imagination where books feed the mind, art feeds the soul, events feed the imagination and stories come to life,” Storyopolis also will be at the Fairmount Street location and will have a grand opening in June. Its original illustrations from children’s books are said to lift the stories off the pages and onto the walls of children’s rooms…. or those of the nostalgic adult who never wants to grow up. The likes of Sara Ferguson, Julie Andrews, and Hayden Panettiere have done theatrical readings at the Gallery in Sherman Oaks.

“Brad Pitt, Denise Richards, Faith Hill, and Sharon Stone shop and marvel over our fabulous art unique to The Gallery@Storyopolis,” says, Kristine Abramowitz. “We are thrilled to bring our wonderful collection of original illustrations and art from famous children’s stories to Dallas where appreciation for the arts has energy unlike any other city.”