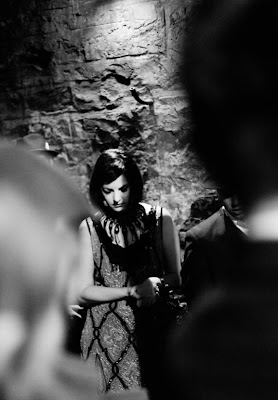 
Artbite: This past October we experienced the spectacular magic that is Speakeasy Dollhouse. Walk us through this charmed menagerie….

Cynthia von Buhler: "Nobody still living in my family knows why my grandfather was shot. When I began my search, nothing was known about the killer, his motive, or a trial. My grandmother took these secrets to her grave. And so, over the past year, I have been dusting off a complicated tale of bootlegging, mafia, infidelity, and murder set in Prohibition-era New York City.

I was inspired by Frances Glessner Lee’s miniature crime scene sets. She established the Department of Legal Medicine at Harvard in 1936. At that time, innumerable murders went unsolved because evidence was mishandled or downright ignored. To train investigators of sudden or violent deaths (like my grandfathers) and to better assess visual evidence, Lee created the Nutshell Studies: dollhouses that students could examine from every angle. Inspired by Lee’s murder dioramas, I decided to create the scenes from my own family mystery using handmade sets and dolls. Utilizing evidence from autopsy reports, police records, court documents, and interviews, I built a dollhouse-sized speakeasy, a hospital room, a child’s bedroom, and a pre-war apartment. I also created lifelike dolls with moveable limbs to live in these sets.

But dolls don’t make their own decisions. By adding actual human recreations of the characters and placing them in an interactive theater setting, I am taking Lee’s method of dollhouse crime scene investigation one step further. The play stages these events in mobster Meyer Lansky’s former Lower East Side speakeasy. The location is elaborately set up to mirror the dollhouse sets from the book. I like to think of the speakeasy as my dollhouse and the actors as my dolls.” 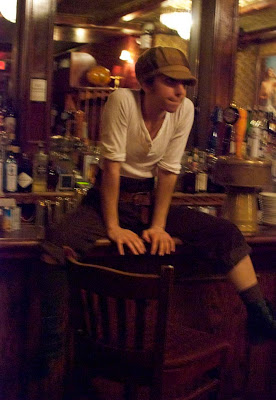 Dominick Spano: “My Pa owns the best speakeasies in the whole Bronx. He’s the biggest man around. Mister door man runs the club at night, but really my Pa runs it because he knows everybody and everybody knows him, and his place is better than stupid old Dutch’s place. Mister Dutch Schulz owns a place too, but it isn’t as good as my Pa’s place. And it doesn’t have the best cannolis in the city, either-- my Ma makes those. She makes the tea and soda pop too, but I help, I’m always helping and I’m getting better and better at it, really I am. I made the last batch of tea all by myself even, and Pa says it’s real good.

If you come by the club or the bakery you can try some tea or special coffee. In the bakery the nice lady sometimes gives me coffee if I ask real polite-like, and if that bad police man isn’t looking I can snatch some candy from the jars. Nobody but the mean old police man minds. Sometimes my Uncle Frankie is down there too, playin’ cards with the boys. But my Aunt Anna always beats the boys, and she leaves messy lipstick on Uncle Frankie’s cheek.

If you go up to the club you have to know the password to get in. Mister door man only lets me in without the password, because my Pa is important and that means I’m important too, because someday I’m gonna run the whole place myself, because I’m the biggest. If you get into the club, you can hear some real good music and meet some real nice people-- some bad people too, though. Sometimes big old mister Tammany Hall man is there, his name is Jimmy Hines. He comes with his friend with a real nice top hat, Hulon Capshaw. He talks to Jimmy Hines but Jimmy don’t say much because he’s just drinking and singing Irish songs. You can dance up there too, but be careful if you see those pretty ladies Mrs. Guerrieri and her friend Lena. . . they’re friendly, but Ma thinks they dance too much. She says they should go to church and ask the Lord to forgive them. My Ma prays to Mary, the Mother of God all the time. Ma might give you a special present if you’re nice to her.

Frankie Guerrieri goes to my school. We were friends before when he lived in the Bronx. Now I hate him. I’ll tell you why if you buy me a drink. I’m old enough, promise, I just don’t want to go and bother the bartender right now. . .
His Pa, Mr. Guerrieri, is one of those quiet types. He owns a barbershop and sometimes he cuts my Pa’s hair, but I don’t like him either. I think he’s got funny eyes and I don’t think he likes my Pa very much.

But if you do come by (and you should, you’re such a good friend of the family and we haven’t seen you in such a long time!) you should keep your eyes and ears open. You never know what will happen around here, and I got something to tell my Ma that she isn’t gonna like very much...”

Live Urban Walls has partnered with Cynthia von Buhler in projecting a variety of Speakeasy Dollhouse videos. Buy tickets and the book here.
Posted by CVB at 7:48 AM