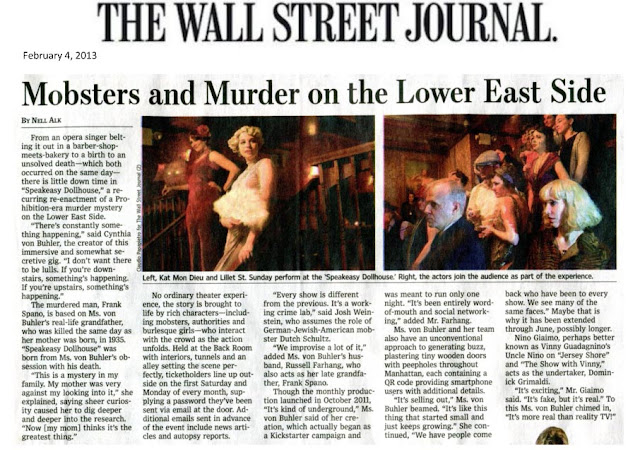 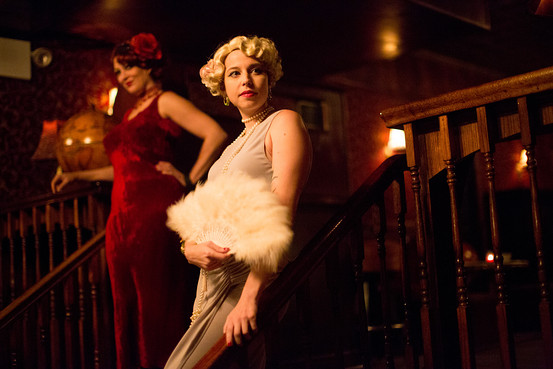 Mobsters and Murder on The Lower East Side

From an opera singer belting it out in a barber-shop-meets-bakery to a birth to an unsolved death—which both occurred on the same day—there is little down time in “Speakeasy Dollhouse,” a recurring re-enactment of a Prohibition-era murder mystery on the Lower East Side.

The murdered man, Frank Spano, is based on Ms. von Buhler’s real-life grandfather, who was killed the same day as her mother was born, in 1935. “Speakeasy Dollhouse” was born from Ms. von Buhler’s obsession with his death.

“This is a mystery in my family. My mother was very against my looking into it,” she explained, saying sheer curiosity caused her to dig deeper and deeper into the research. “Now [my mom] thinks it’s the greatest thing.”

No ordinary theater experience, the story is brought to life in three hours by rich characters—including mobsters, authorities and burlesque girls—who interact with the crowd as the action unfolds. Held at the Back Room with interiors, tunnels and an alley setting the scene perfectly, ticketholders line up outside on the first Saturday and Monday of every month, supplying a password they’ve been sent via email at the door. Additional emails sent in advance of the event include news articles, court documents and autopsy reports.

“Every show is different from the previous. It’s a working crime lab,” said Josh Weinstein, who assumes the role of German-Jewish-American mobster Dutch Schultz.

“We improvise a lot of it,” added Ms. von Buhler’s husband, Russell Farhang, who also acts as her late grandfather, Frank Spano.

“We’ve made a lot of changes,” explained Ms. von Buhler. “The show has become more surreal. I’m from 1979.” Though surrounded by people dressed in flapper garb, her own outfit included Chuck Taylor sneakers and a tattered Ramones tee, as well as a black wig styled in a bob with bangs.

“I think dressing up is fun, no matter the occasion, so I was all into it,” offered Mark Becker, a handyman and part-time actor himself. “It creates a sort of solidarity among people, and this event was no exception. I noticed lots of folks admiring each others’ costumes. I’m not sure what era my style is from, but I did my best with a paperboy hat and suspenders.”

Though the monthly production launched in October 2011, “It’s kind of underground,” Ms. von Buhler said of her creation, which actually began as a Kickstarter campaign and was meant to run only one night. “It’s been entirely word-of-mouth and social networking,” added Mr. Farhang.

Ms. von Buhler and her team also have an unconventional approach to generating buzz, plastering tiny wooden doors with peepholes throughout Manhattan, each containing a QR code providing smartphone users with additional details.

“It’s selling out,” Ms. von Buhler beamed. “It’s like this thing that started small and just keeps growing.” She continued, “We have people come back who have been to every show. We see many of the same faces.” Maybe that is why it has been extended through June, possibly longer.

As for his favorite aspect of the performance, Mr. Becker shared his affinity for the macabre. “I was definitely most impressed with the coffin scene, based on what went into it.”

Mr. Farhang later said, “It’s actually pretty traumatic to go through the whole thing—the fighting and the dying. Then to hear people grieve at your funeral? It blew my mind the first time I did it.”

Of the actual casket, Ms. von Buhler said in all seriousness, “I want to be buried in it.”